Jim had his 29th birthday in Prague.

I am simultaneously envious of his having a birthday in Prague, and immensely grateful that I could be here to share in the enjoyment.  The day began with another ascent up the shoulders of Vyšehrad, to Caffé Fresco, a hip little spot that served eggs and coffee and everything else we were after.  Since it was a special day, the general consensus was that we needed to find and eat a lot of cake, which didn’t seem like it would be all that difficult, considering how much cake we’ve come across on a normal day without even trying.  Eventually, with cake on the brain, we began quoting Eddie Izzard’s “Cake or Death” bit at length as we made our way.

Walking from Vyšehrad into the city, we spotted a sign for Café Amandine, which had come up in previous internet searches for breakfast spots.  We decided to check out their cake selection, and were immediately excited at the prospects as soon as we entered.

Look at all that cake!

It’s a very fashionable spot, with fashionable cakes to match.  In fact, the aesthetic was reminiscent of our very own Cupcake Palace. 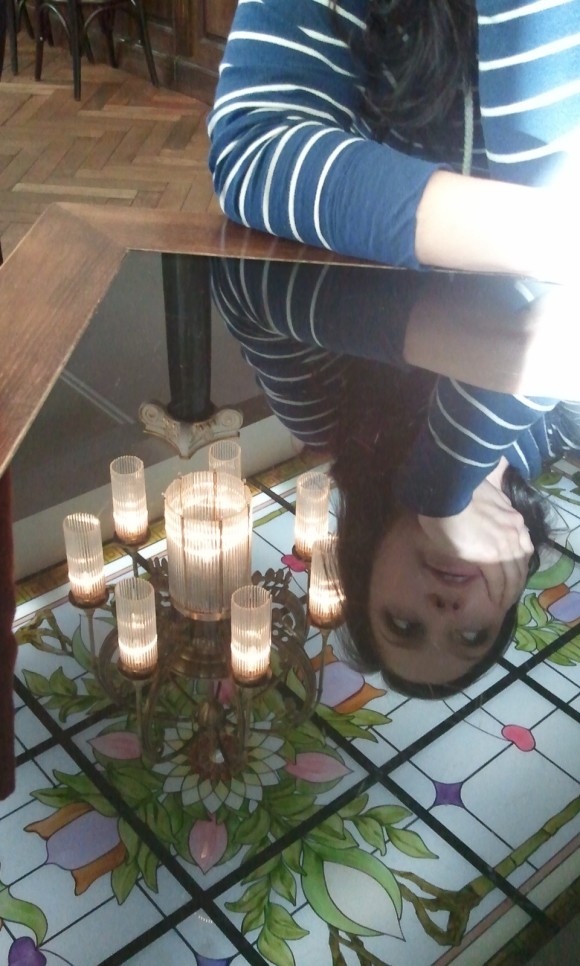 Sarah ordered French onion soup, and Jim and I went with desserts: French apple pie with caramel ice cream and cinnamon whipped cream for me, and a chocolate ganache cake served with carmelized plums for Jim.

Someone's got his cake-face on.

From there we walked to the train station, because we decided that a day trip to Český Krumlov was in order (more about that later).  Jim had a cheat-sheet filled with what to say in order to purchase the tickets, which he relied on heavily; once the transaction was complete, the woman at the counter said something in Czech that sounded like “information” and threw down three silver coins.  Vaguely confused, Jim collected the coins and the ticket, and we wandered haplessly toward the information booth.  It turns out that the coins, which were the no-cash-value amusement park type, were for the soda machine directly in front of us, from which you could choose either water or Pepsi.  Sarah laughed at our confusion, because apparently the woman had said “Free drinks” in English, and Sarah was the only one who heard it.  So we got our free drinks (we all chose water) and continued on our way.

We were going to meet up with Conor at 9pm, and still had some time to kill, so we went to Hidden Bar, a place that is probably 25m from our front door, and has pinball, foosball, and beer.  A few half-liters and a game of dominoes later, it was time to leave to meet Conor, who announced upon arrival that we were going to a place where beer and games were in abundance.

The place, called MegaSportBar, lies at the end of an unremarkable, graffiti-lined alleyway.  Upon opening the doors, you descend down five or six stairs into a huge, smoky ballroom filled with billiards and snooker tables– something about it gave me the feeling of going to a speak-easy, or some other underground establishment upon which the authorities would certainly frown. When you enter, you get a ticket that you must keep on you at all times because anything you purchase (beer, billiards, or any other game that isn’t coin-operated) gets tallied on and you pay for everything at the end.  We bypassed the tables, fetched some beers at the bar, and headed to the back room where the pinball and foosball games resided.  Most of the people in our group jumped right into pinball, but Sarah and I found what would soon become the all-consuming game of the night: Street Basketball.

Street Basketball is the jam.

We occupied that game for the better part of the night.  At one point we did take a break from basketball to play an hour’s worth of bowling.  The bowling was ridiculous; the pins were hung on strings, the lane listed pretty heavily to the left, and none of the balls was lighter than 12 lbs.  But it was spectacular fun.

After bowling, it was back to Street Basketball for the rest of the night as members of our group took turns trying to best each other’s high scores.  Soon it was after 1am and time to move on.  We went next to Chapeau Rouge for drinking and dancing.  Interestingly, in our normal lives neither Jim nor I dance, but it was a special occasion and so dance we did, and quite ridiculously at that.

After another hour or so, it was very much time to head home.  Conor made sure we knew the way to go, which we did (albeit in a very general sense), and then we all parted ways.  Sarah, Jim and I walked home in high spirits at the conclusion of what we all agreed was an excellent day, and then we turned a corner and ended up in Old Town Square.  At 3am, under a bright moon and a handful of visible stars, and no one else around.

It’s hard to convey the feeling of seeing what we’d previously only seen in daylight, surrounded by the cacophony of a half million people all striving to see the same thing, suddenly shrouded in pale moonlight and silence.  The view of the Týn Church’s towers beneath a smattering of stars was indescribable (and, unfortunately, not able to be captured by our cameras).  It was as though we had the whole place to ourselves, which imparted a feeling of peace not likely to be experienced here again.

Look at how many people there aren't!

Most amazingly, we got to have a moment with the Astronomical Clock on our way out of the square.  Looking at the clock mechanism, up to the tower, and then to the stars beyond, was a moment of sheer poetry.

After that, it was a long but lovely walk back to the Cupcake Palace.  We didn’t hit the beds until nearly 5am, which meant the next morning didn’t begin until the afternoon, at which point we stumbled across the street to Pod Slavínem for mountains of Czech comfort food.  The next day, we’ll head out for Český Krumlov, and we cannot wait.