Our days in Kraków continued in line with the rest of the trip: wandering and eating.  We became familiar with the kebab stands that served falafel sandwiches (which isn’t all of them, surprisingly, and the ones that do use strange ingredients like green olives and corn).  Adding to the whimsy of our wandering were a couple strategically-placed bubble machines around Old Town.

This bubble machine is attached to a locked bike. Why? Why not??

After a day of wandering, we’d return home to our hostel.  This was the first time we’d stayed in a hostel the whole trip (conversely, our last trip to Europe was spent exclusively in hostels), and getting used to the group dynamic was slow going at first.  There was a group of Hungarian girls who checked in a few hours after we did, and they were bound and determined to befriend everyone they encountered on our floor.  Particularly endearing was how they said “Hallo!” for “Goodbye!”; incidentally, I ran into them all over town while we were staying there, and could instantly recognize them by the chorus of “Hallo!” that invariably followed.

Another hostel moment: we stayed in one night, and the guy on the other side of our wall was comparing versions of “Ne Me Quitte Pas“, quite possibly the saddest song in the world.  First came a version done by a female (who sounded at first like Édith Piaf but ended up being someone else), and then the consummate version by Jacques Brel… and then another, live version of Jacques Brel, and so on.  We could tell that our neighbor was exorcising some demons, because by the third version, he began to wail along in a cadence suggesting the involvement of copious amounts of wine.  C’est la vie.

By this time, St. Patrick’s Day weekend was upon us.  Neither Jim nor I are heavy drinkers, but we did want to get out and enjoy the weekend, so we set our sights on music.  On Friday night, we went to a place in Kazimierz called Poligamia to see what the website described as an “Irish duo playing Celtic tunes”, which was a bit misleading; we were expecting “Whiskey In A Jar” and instead got contemporary original songs about bike-riding and such.  But the duo was in fact Irish, and the music wasn’t bad, so it wasn’t a total bust.

On Saturday, Kraków had Irish fever in a bad way.  Everyone was wearing green, and the weather was starting to get nice so every outdoor patio seat in the Square was filled.  Being the beer enthusiasts that we are, on perhaps the beer-drinkingest day of the year, we decided we wanted to check out CK Browar, a brewpub just off the Square.  We descended into the cavern and found some unreserved seats.  I ordered the weiss beer, and Jim had the porter, and to accompany the beers we decided on a basket of fried things.  I found the weiss to be pleasant, if unimpressive, but Jim’s porter was acrid and immature-tasting.  We finished the beers and the fried things and moved on to Cztery Pokoje, a little coffeeshop where there was to be blues music that evening.  It ended up being another duo, this time a girl singing and a guy playing guitar.  Their set was comprised of tried-and-true blues tunes, and they were very talented, but we weren’t feeling particularly engaged so we left.

On Sunday, I decided to hit the streets and do a little busking. 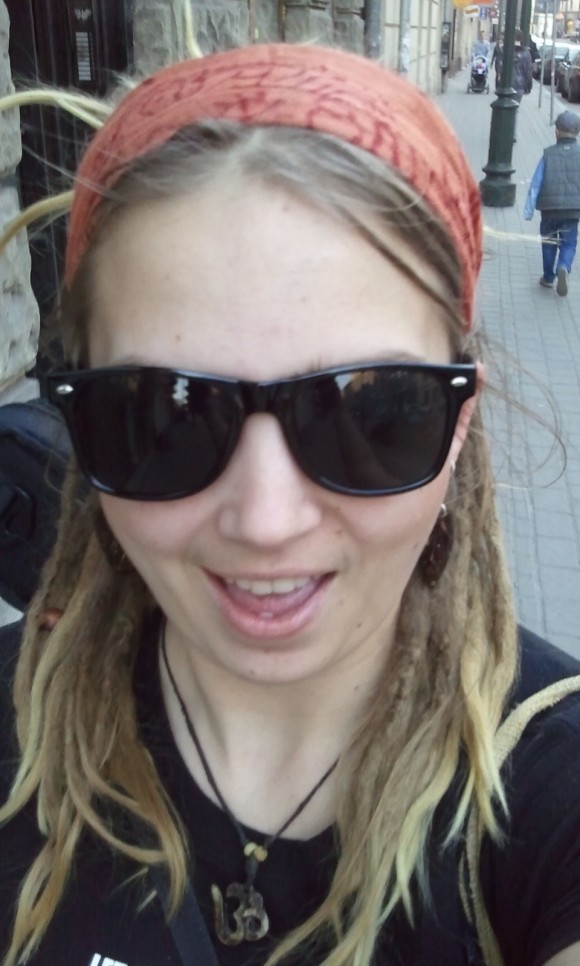 This is my busking face. I wear sunglasses to hide the terror in my eyes.

I did all right for myself.  I sold a CD to an American couple who happened by, and made about $16 in an hour.  Since busking makes me nervous, I was very pleased that it went so well, and went home to tell Jim all about it.  We decided to ride the celebratory wave over to Harris Piano Bar, a place on the Square that promised live jazz.  Upon entering and descending the staircase into the venue, you pass a giant statue of a reclining, tuxedo-clad Louis Armstrong.  A good sign.

The music was great.  As you might guess from reading the blog, I’ve developed a soft spot in my heart for raggy jazz performed by middle-aged, middle European men, and this band delivered exactly that.  Jim and I toasted to our success in selecting the winning venue.  At some point, we befriended some guys from Belfast who were on holiday.  We drank and traded stories, and once the show was over, we took turns singing songs (and continuing to drink).  I don’t exactly remember how we parted ways, but it was tremendous fun.

Less fun was waking up the next morning and realizing that it was Moving Day.  We enjoyed our time at the hostel but missed having a kitchen in which we could cook, so we had made plans to cross the river and stay in the Podgórze neighborhood.  After some confusion, and some water, we packed ourselves up and headed to the flat.

I didn’t realize, until a day or two later, that this was the actual Kraków ghetto, although I’d begun to suspect it based on the melancholy of the surroundings. 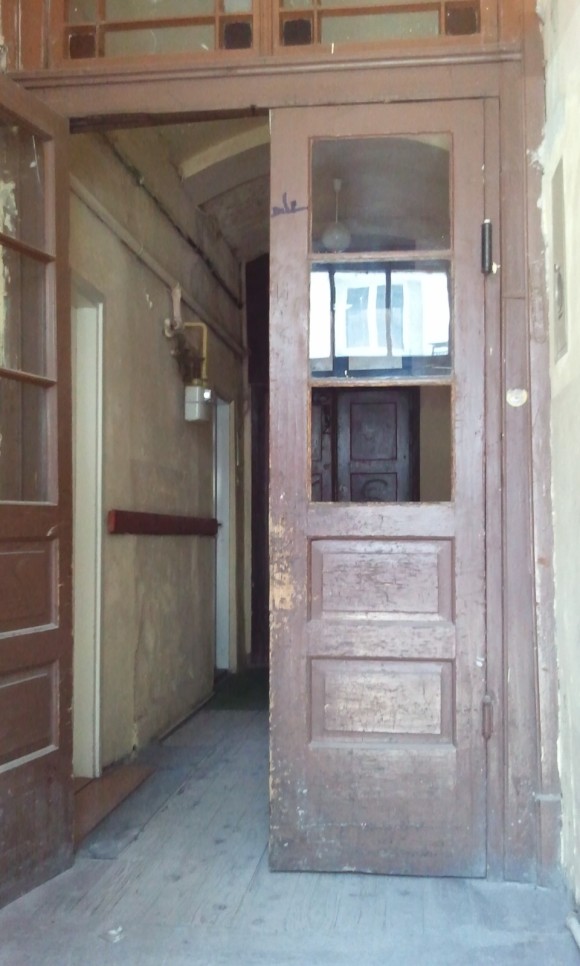 The entryway to our flat.

The flat itself was quirky and fun.  It was a studio, with a glass-top stove (the second one we’ve dealt with so far) and some funky photos on the wall.

This one was visible from our bed.

Once we arrived, we promptly dropped our things and slept the rest of the day, emerging after dark to hit up a pizza place, Delecta, that Jim spotted on our way in.  The pizza did wonders for our sad bellies; always trust an Italian restaurant that grows its own basil on the windowsill. 🙂

Our time in Kraków was already winding down, and our day of rest meant we had to make steadfast plans to visit the two places we knew we had to see before we left: the Wieliczka Salt Mines, and Auschwitz.